Note: Click any of below pictures to open photo gallery. To exit from gallery, click tiny white x mark located at the upper-left corner of the screen or any empty black area.

Happy Birthday from Google, What a surprise.

I thought he was my boyfriend. Sorry, He is a volunteer.

1/27. Walnut Creek Rossmoor. Dancing like a crazy. My hair is mess.

My eyes are not big & bright as Carol Channing’s eyes.

Curb appeal? Not quite.

Birds Sanctuary? – Too many bird droppings

5/15/13: The Culinary Institute of America at Greystone — Main Course

June 15: It was the coldest “winter” day in San Francisco. Freezing!!!

With dancers. Gathering of Estonian League of the West Coast and SF Estonian Society

Baruto Kaito (born as Kaido Höövelson) was a professional sumo wrestler in Japan. In 2012 Estonian president Toomas Hendrik Ilves awarded the Order of the White Star to Baruto.

She is not housebroken dog … She does not know any commands … I don’t think she is a maltipoo.

My 4-year-old is afraid of new puppy

She escapes, destroys, chews everything, and gives me headache… Yet she is lovable and bring vitality to our life.

She wants be held all the time, so I carry her in backpack while cleaning the house.

Relax – After Tea Dance. — And before facing a mischievous whirlwind little monster at home.

She is mad because I put a diaper on her after she wet the floor.

She can remove a diaper in 10 minutes.

One-chan is a boy but he looks classy – just like me!

View of Academy of Science with its grassy hills roof. Fog start rolling in.

7/20/2013 with mezzo-soprano Zanda Švede from Latvia. She held my hand warmly.

7/20/2013 Merola Opera.. L’italiana in Algeri : Zanda Svede She made for a wonderfully sassy Isabella, very charming!

7/14/2013 Todos Santos Plaza, Concord (7 miles from my house) John & I gathered here and did some paintings

John’s charcoal drawing of me

What a agreeable surprise! My abandoned orchid blooms every year.

8/24/2013: A pair of Oracle Team USA sail their AC-72 Racing Yacht as they test out the course. It was just before Race-7 New Zealand vs. Italy begin.

8/25/2013: I was in the city all day. I went ballroom dancing in the evening at gated community Rossmoor in Walnut Creek.

I am not photogenic. I always disliked my looks. However, I love this photo of me. Is it technique? creativity? subject matter? story telling? No, none of them. Simply soft lighting and red background color made my face look nice.

8/29/2013: CALIFORNIA SYMPHONY. Pops on the Plaza Concert… Conductor: Donato Cabrera. He is a very personable man.

This palm tree is 20+ year-old. I never give fertilizer, so it stays small. You can see new leaves. I don’t have them every year due to malnutrition.

9/7: Exploratorium. I got some attention from guys because I was only one wearing RAIDERS’ cap. I assume they are RAIDERS’ fans.

Before the actual America’s cup race on Sept. 7

I must admit this is me…

9/8: The sunshine and gentle breezes that filled the meadow for one of the reliably delightful landmarks of the fall cultural calendar.

I was standing next to Jockey. Suddenly woman pushed me to the side. Jockey whispered me that he will take a picture with me after he finishes with another group.

. . . and here I am. Jockey (Russell Baze) and me. He was inducted into Thoroughbred Racing’s Hall of Fame, Canada’s Horse Racing Hall of Fame. North America’s winningest jockey.

how fat I am grown! – absolutely as round as a ball

Jeff is a highly regarded pianist, vocalist, arranger, composer, and great entertainer. we were dazzled by his wife Anne’s technique, awed by her tone.

There are six performing rooms in Clarion Hotel. Every room had two pianos. I don’t understand what “syncopated, or ragged, rhythm.” Even though, I enjoyed music.

Saturday was special. Some people wore slightly toned-down vintage costumes in the morning & afternoon; they changed into very formal attire in the evening. I didn’t bring costume with me. ( I don’t have one)

I went in to the bathroom after dance lesson. Woman wearing similar clothes as mine, shouted at me ‘I saw you were dancing with my husband!’ I was scared a moment. Then I replied; “I’ve enjoyed every minute of it!” (laugh)

11/28/2013: I am showing off my ipad at Thanksgiving Dinner table. To: Tina & my son thanks for your hospitality. To: Daisy, it was wonderful dinner.

12/01/2013: Fundraising for a Kupuna (Elder) Group that will be entering in a Kupuna Hula Competition in Kona, Hawaii representing Concord, CA in 2014

12/06/2013: You should buy a ticket on center area seat. It is cost more but worth it. Remember, it is a circular tent, circular stage, and circular seating arrangement.

12/06/2013: Acrobatics, juggling, uneven bars, a teeterboard, and a crocodile fondling his mammoth tail were memorable.

12/09/2013: Respect Flag. It’s the embodiment of the history. It’s infused with the sacrifices and blood of people.

My son & his wife. My baby is 40+ years old. They have been married for ten years, and they are still madly in love.

12/09/2013: I am not a Christian, however, May this Christmas bring everyone joy and happiness, peace and love. 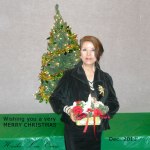 12/09/2013: Christmas? Feelings of emotional isolation, personal Mortality, and loneliness may become overwhelming to those who feel left out of the “family of mankind” sentiment generated by the season.

1993 performance. . . 20 years ago. It was my first time with SF Ballet. This program book was $4. I brought this old program with me, showed off to every ushers. They were pleasantly surprised.

12/17/2013: SF Ballet Nutcracker. In the afterglow that follows the matinee, I linger a long time.

12/17/2013: SF Ballet Nutcracker. 15 min. before play of Peter Tchaikovsky’s The Nutcracker Overture. . . I ordered a ticket online for myself. It was good seat “center section row A”.

12/31/2013: If I lose weight next year, I like to attend “New Year’s Eve Masquerade Ball with the San Francisco Symphony.” Dinner packages $160 is a bit steep, also who am I – going to mingle with?

New Year’s Eve at Home. In my family room. Ready to go out.

12/31/2013: Burlesque show: I wanted to buy a drink, but I don’t know any name of drink, so I said to bartender “give me something SWEET” I got Raspberry lemon drop. Enjoyed.

12/31/2013: This is my first time seeing girls take it off and shake it in the sexy burlesque show. Here, no debate about morality. It is just another occupation. Darn it, I forgot to buy tassels.