April 14, 2013.   My dear friend Poonam came back to California with her two little boys from India where she spent six months with her relatives. I was invited to her sister’s family in San Ramon where Anju threw “Welcome” party for Poonam. This was my first time meeting many Indian couples and children. I wasn’t sure how I should act around them regarding Indian manners and etiquette.

First things I noticed was “take shoes off.” That concept is similar to Japanese house.

You press hands together with all fingers pointing towards the sky in front of your chest and politely say Namaste, while looking at the person you are saying it to. Namas (meaning – to bow) and Te (meaning – to you). Thus, its real connotation is ‘I bow to you out of respect’. In Japan, the Namaste hand gesture is not used as greetings, however, used in prayer and is called Gasshō.

I was very baffled when I saw young adults and children touching the feet of their elders. I asked one of young mother. She explained to me that people touch the feet of elders to show respect and in return receive a blessing. Touching elders’ feet is the first lesson in manners and etiquette that all Indian children are taught.

I noticed that men and women did not mingle. I enjoyed eating Curry-Rice. Of course, it is not same as Japanese Curry-Rice, Indian Curry was/is a million times better. I had fresh bread, I watched whole process made by hand and deep-flied them.

Symbols Of Marriage In Hinduism

I never saw Poonam wearing Formal Sari before. OMG, she is so beautiful!!! There are many fascinating tradition and custom relating to symbols of marriage in Hindu. Most of symbols are for women. All these symbols (sindoor, thali, bindi, bichiye, bangles and mangalsutra) have a specific meaning and significance.

India is a vibrant amalgamation of varied ethnic groups, climate, cultures, regions, and traditions. Some symbols are different among married women. For example, Poonam wear Nose-Ring (actually nose stud) but other women’s do not because it’s not their tradition.  (I was so confused. Everybody trying to explain to me, but they told different things because they are from different communities/regions in India with different traditions. So, my writing here may not be accurate.)

She is a married woman. How can you tell ???

Mangalsutra is considered the most revered token of love and respect offered to the bride during the marriage ceremony.

bangle – jewelry worn around the wrist for decoration 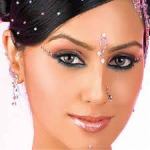 A woman’s beauty is multiplied 1,000 times when she wears a bindi.

Bindi – The dot on the forehead!

Vermilion or Sindoor: is a red colored powder that is applied in the parting of the hair by married women.

Overall, it was a quite education for me to learn Indian tradition. I hope I did not offend anyone due to my ignorance about social and cultural etiquette. If I did, it is unintentional faux pas. Poonam, thanks for gifts (Indian scarves, jewelry, and lota (google it to find out what it is — I didn’t know what lota is.  I thought it was a urn.). Anju, thanks for your kind hospitality. Greatly appreciated.

I met Poonam three years ago, and then shortly after, she and her husband moved to southern California. She wrote a poem about me after perusing my personal website. I am going to re-post it here.

Poonam, thank you!  I am honored and humbled. I like this poem very much because it describes my struggle in the US.